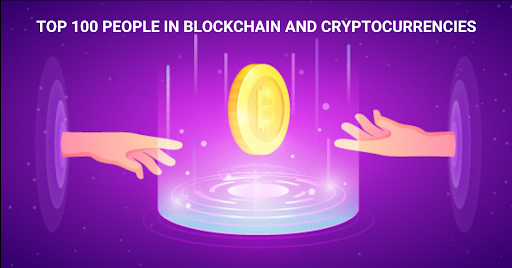 Top 100 People in Blockchain and Cryptocurrencies

A heavy bank balance alone cannot buy you authority in crypto, nor does having the most social media fans. Nevertheless, approx $25 billion investment made in crypto startup companies last year, combined with almost a trillion dollar economy into this space now, can make it challenging to cut through the noise. The debut TOP 100 CRYPTO LIST attempts to make sense of it all.

Each person on this list does incredibly important work and has significant influence in the industry. We truly admire their achievements and congratulate them for utilizing their talent, company funds, and network to bring the best to the crypto and blockchain industry.

List of the Top 100 people in Blockchain and Cryptocurrencies:

#2 Vitalik Buterin:  Ethereum co-founder and one of the world’s youngest crypto billionaires. A researcher and developer, he also co-founded Bitcoin Magazine.

#5 Ben Zhou: Co-founder and CEO of Bybit, one of the top three crypto exchanges in the world. He is also a committer and supporter of BitDAO.

#11 Chris Dixon: General Partner at Andreessen Horowitz (a16z) and a leader of its crypto funds ($865 million)

#15 Naval Ravikant: A serial entrepreneur and angel investor with numerous successful tech startups in his wake, Naval is most notable for being co-founder of Angelist in 2010, which subsequently spun off subsidiary Coinlist in October 2017 to offer ICO services to startups and investors

#18 Erik Voorhees: CEO at Shapeshift, co-founder of Coinapult, worked as Marketing Director at BitInstant (one of the earliest crypto exchanges), and was the founder of bitcoin gambling site Satoshi Dice.

#19 Devin Finzer: Co-founder and current CEO of OpenSea, the biggest NFT marketplace in the world

#21 Emin Gün Sirer: A Turkish-American computer scientist who developed the Avalanche Consensus protocol underlying the Avalanche blockchain platform, and is currently the CEO and co-founder of Ava Labs.

#23 Michael Joseph Winkelmann:  Mostly known as Beeple in the crypto space, is a digital artist, and graphic designer

#25 Alex Mashinsky: Alex has generated over $1.5 billion as the creator of eight firms and three Unicorns, with over $3 billion in exits, and currently leads the Celsius team with more than $25 billion in crypto assets.

#26 Adam Back: Co-founder and CEO of Blockstream, a blockchain and Bitcoin technology company, and creator of Liquid

#27 Gavin Wood: Co-Founder of Ethereum, President, and Founder at Web3 Foundation, developer of the Polkadot Protocol

#30 Michael Edward Novogratz: Former partner of the financial company known as Fortress Investment Group in the United States. He is the current CEO of Galaxy Investment Partners, which mainly concentrates on crypto investments.

#31 Sandeep Nailwal: The founder of Polygon ($MATIC) and an Indian entrepreneur. Nailwal is also the creator of the Crypto Covid Relief Fund in India.

#32 Cathie Wood: Founder, CEO, and CIO at ARK Invest, an investment advisory that only invests in disruptive innovations

#36 Francis Xavier Suarez: 43rd mayor of Miami and an American lawyer and politician. Suarez is a crypto-friendly politician who has advocated for Miami’s growth as a cryptocurrency metropolis.

#47 Elon Musk: Avid supporter of crypto and was one of if not the biggest contributors to Dogecoin’s success. He is also the new owner of Twitter Inc

#49 Abhyudoy Das: Mostly known as the Face of crypto marketing in India and Asia. Currently working as the Head of India at Bybit to drive crypto mass adoption, he also advises a bunch of promising crypto projects.

#50 Gavin Andresen: Founder and Chief Scientist at Bitcoin Foundation. Prior to this, he was the Lead Core Bitcoin Developer at TruCoin.

#52 Olaf Carlson-Wee: Founder and CEO of Polychain Capital, one of the top cryptocurrency and blockchain investment funds, with investments in 48 companies.

#54 Rune Christensen: Co-founder and CEO of MakerDAO, the issuer of the first stablecoin for the Ethereum blockchain, Dai.

#64 He Yi: Co-Founder and CMO of Binance. Leader of Binance Labs

#66 Dan Morehead: Founder and CEO of Pantera Capital, the first US investment firm with funds in cryptocurrencies and blockchain.

#70 Brandon Chez: Founder and CEO of CoinMarketCap, one of the most-visited sources of cryptocurrency rankings, data, and others.

#72 Jinglan Wang: Co-founder and CEO at Optimism PBC, an Ethereum OVM that aims “to enhance and enshrine fair access to public goods on the internet through the development of open-source software.”

#74 Nathaniel Whittermore: Host of The Breakdown, a popular daily crypto podcast with numerous followers. He led marketing for FTX which faced bankruptcy recently.

#76 Andre Cronje: DeFi Architect at Ethereum and freelance, with projects including yearn.finance, curve.finance, and ytrade.finance. He is also Chief Crypto Code Reviewer at the ICO review and cryptocurrency media company CryptoBriefing.

#77 Laura Shin: Host of the podcasts Unchained and Unconfirmed, and her upcoming book will be published by PublicAffairs

#78 Danny Ryan: Researcher leading Eth2 at the Ethereum Foundation. Prior to this, he was a cryptocurrency investor and contributed to open-source Ethereum projects.

#82 Preethi Kasireddy: Writer and autodidact who offers a free email course on cryptocurrency

#88 Amber Baldet: Co-founder and CEO of Clovyr. A leader in the financial industry’s turn towards blockchain, she was Executive Director for the Blockchain Center of Excellence at J.P. Morgan and is on the Blockchain Council of the World Economic Forum

#93 Dan Schulman: President and CEO of PayPal, which has recently allowed users to buy, hold, and sell cryptocurrencies within their PayPal wallets